YOU’VE GOT THE POWER – WHAT STOPS YOU? WE ARE ONLY 24 DAYS IN 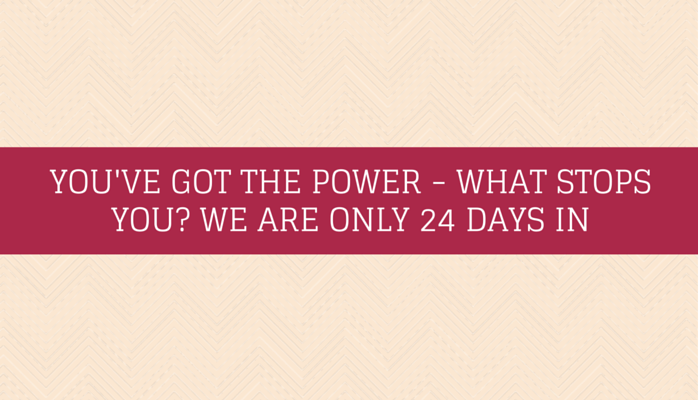 So, we are at the end of the month or approaching it rapidly and 2015 is officially in full swing…

According to all the statisticians, over 90% of people have already given up on their resolutions! In fact, half of all people had given up by day 9…

Are you one of them?

Have you already given up on your resolutions or maybe you did not set any? I spoke at a YES group meeting a week or so ago and no one set resolutions at all… They had goals and they just kept living to them whatever time of year it was. They were certainly a group of evolved individuals.

Most people are not like that though, are they?

Most people just kind of make it through each day with no grand plan, no grand design, no nothing – It is just enough to wake up, do something and go back to bed, wake up and do it all again.

And there have been times when I have felt like that… You know that feeling of quiet desperation and a sinking feeling that life is going to be like this forever?!

What if you could start to make plans, create ideas that you actually make happen faster than you ever have before? It is possible, you know and you really do not have to only do it in January.

I know you know that but for some reason, it has always felt a whole lot more hopeful in January, hasn’t it?

But then, in just a few days, weeks, it feels the same again and you kinda know that unless you do something massively different, this year is going to be the same as last year and the year before & the year before that.

And, you know, maybe you had some great years there according to the people looking in at your life but you kinda know that you could have done a whole lot more, right?

Well, I do have something planned for you so watch out for that on Monday but in the meantime, go get this free gift & start to think of all the things you really wish you had committed to getting done.

What got in the way? Be honest now…

What stopped you from doing what you know you could if you committed to it? Is it that you don’t feel able to get stuff done or what is it? Tell me in the comments below.

WHEN YOU START TO LIVE YOUR CALLING... It feels we

For so long, I dishonoured myself. . I allowed mys

How to Stop Living From Paycheck To Paycheck. It i

. How you have shown up to date, has created your

I want us all to rise. It feels cheesy, idealistic