You are never doing as much as you can

By Rosemary Nonny KnightAugust 5, 2015May 4th, 2020Self Development
No Comments 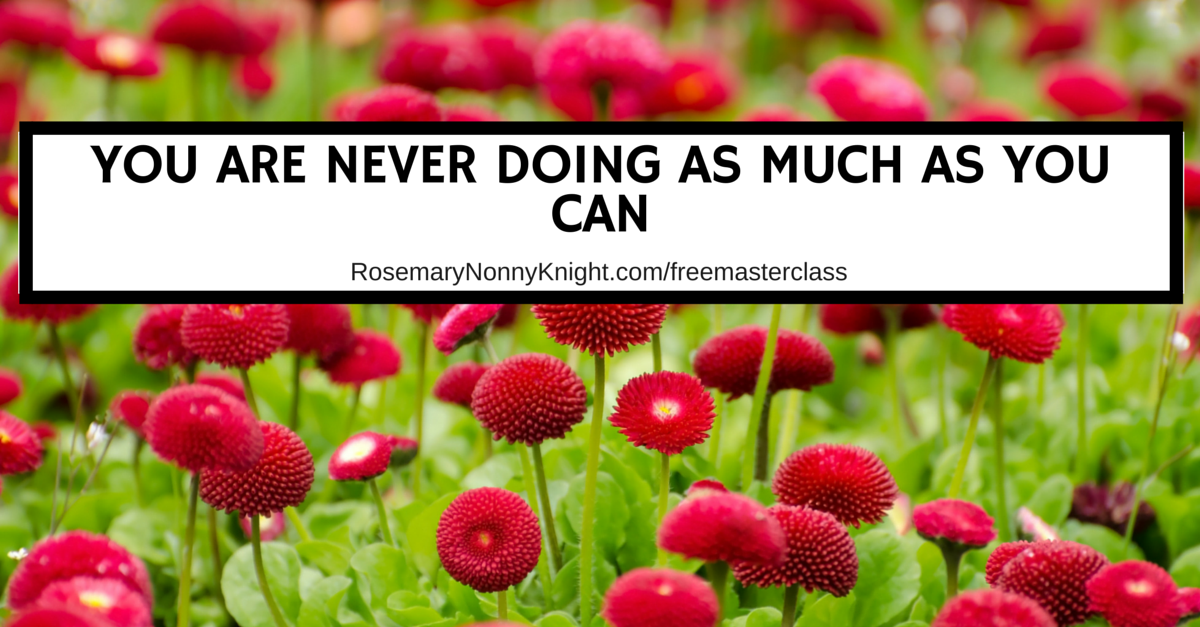 You have an invisible cap on you…

You don’t know it but you do.

You think you have reached capacity but somehow if you had to, you would fit something else into your life and do it pretty easily. Yes, you would complain a whole lot about it but you would get it done.

Which makes me look at you and question…

How much do you want this?

Because if the only thing getting between you and what you want is this invisible cap… Why do you persist in wearing it?

Why do you persist in believing you are incapable of so much more when you and I know that you are?

And you are not alone in this. I too can be a victim of the invisible cap. I think I am stretched out, worn out and it is impossible to do anything else and then somehow I manage to fit in some nonsensical ‘waste of time’ thing anyway.

What makes us do this to ourselves?

I am already taking myself to task about this, but are you? Or do you still believe the lie that you are at capacity?

Or worse, you think that you have done enough to deserve a break now.

But let me ask you another question…

Are you where you want to be?

No?! then you do not deserve a break.

What makes you think you are powerless?

I have a sixty something year old client who is buying houses, doing them up and writing a book and running a hotel as well. And she keeps fitting more stuff in. I have to keep asking her if it is getting her somewhere. She is trying to make up for lost time.

Are you waiting as well?

Are you waiting for retirement before you pick up the pace?

She would rather spend that time complaining about it and trying to get out of it.

So now, she has lost twenty minutes – Well, not really lost… The washing up did need to be done but the moaning?… I could have done well without. It would have been easier to get straight to the washing up so she could get on with doing something more fun.

And so it is with you.

You spend a lot of time groaning about the hardship of your life as you know it. You think you are doing too much and so you cannot expend more energy on creating what you want.

And you can keep saying that…

Or you can decide that what you want, that big idea of yours, is actually worth the trouble because I say it again… you are not doing anywhere near as much as you could.

And all the time that you waste telling yourself that you are too busy is time you could have used to create something new.

To make a money-producing asset as we are deliberate millionaires… Not one that only makes you money while you are there on task but one that keeps creating an income for you time and time again.

It really is only a case of persistence.

A few days ago, I looked at my journal from two years ago and I had written down the fact that I was going to create a whole lot of programs to buoy my business. And guess what, I flittered away the time until the middle of last year when I finally got my bum in gear and realized that I was capable of so much more than I had ever thought possible.

And so now I have created about 9 programs, written 5 books and this is my sixth, written incredible amounts of articles and blog posts because finally I gave myself permission to really take the cap off.

I too used to think that I was always trying to do too much and there were always people ready and willing to tell me that I need to slow down and then, I met a magical woman (my million dollar coach) who was even more crazy than I was and I realized that I was living at half mast.

I realized that I could do so much more.

And the truth is that even recently, I have had to take the next cap off when it came to my writing. I realized I was capable of writing a minimum of five thousand words a day even though I home educate my daughters and service clients.

And so, again, I am challenging myself to push through the limits I have placed on myself to become even more productive.

Where could you take the cap off?

Where could you be?

How much could you be making if you just worked that little bit faster and stopped giving in to the ‘mind monkeys’ in your brain that say you can’t?

And I know you are probably surrounded by people who think you need to rest as well. But you know, YOU KNOW.. there is more to you.

So push on, warrior.

Claim the life that is yours to live.

And just to be clear, I am not saying you should stop paying attention to your kids, partner and any of the important things in your life but I am saying that in the time you do have, you could create a whole lot more.

The deliberate millionaire creates a picture of the life they want to live and they leave no stone unturned to create it.

The only stone you need to turn right now, is you…

And what you believe is possible for you.

Because for the final time in this chapter – You are never doing as much as you could.

(This is an excerpt from the upcoming “The Deliberate Millionaire’s Persistence Book” – Have you read the rest in the series? Pop over to RosemaryNonnyKnight.com/freedombookus)

Freedom, true freedom awaits you on this journey.

Even when it feels like you have no strength left,

There is nothing out there judging you and watchin