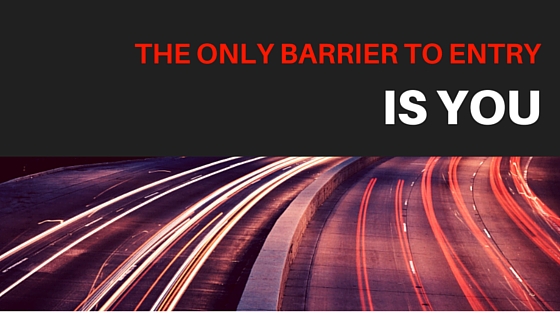 The Only Barrier to Entry is You

I’m a bit late to the party I know, but I just finished watching Mad Men.

Wow. Just… Wow. Don Draper is my hero. Or at least, a close second to Yoda.

I don’t want to ruin anybodys enjoyment of this spectacular piece of television, but the final scene made such an impression on me that I had to share it.

Don Draper is standing on a clifftop, staring out at the sea and the morning sun.

Cut to a group meditation scene.

Having watched this scene, there’s a couple of likely interpretations of it. They both assume some degree of familiarity with the back story and characters, but in summary:

Interpretation 1: Don Draper is a disgusting corporate animal that takes something beautiful and corrupts it to satisfy the greedy desires of his Wall Street clients. In this case, Coca-Cola.

Interpretation 2: Don Draper is an artist, who must suffer and experience all that life has to offer, so as to give birth to his art. In this [fictional] case, the famous and hugely successful Coca-Cola advert.

I think interpretation 1 is somewhat on the uncharitable side, though I can certainly see why you would arrive at this viewpoint. Indeed, I think the writers almost invite you to – given the context. To paint a bit more of a picture, you’ve got Don smiling as he meditates in the final scene. And, given the journey he’s been on (the last seven seasons) and the tumultuous emotions of the final episode… They all build up to a feeling that Don has had some kind of epiphany about where his life is at and what he’s actually looking for.

But then the scene cuts to Coca-Cola, and you’re like: Nope – Don didn’t learn anything at all. He just took the beautiful experiences he had and turned them into a pot of gold for the Coca-Cola company.

But I don’t see it that way.

For me, all of the pain, the emotion, the suffering, the people, the experiences – they’re all a part of the creative journey. They’re all birth pangs. Necessary components of bringing into being something unique and of lasting impact and value to the world.

That’s why Don was smiling. Because he knew he had found the thing. He knows that this particular journey is almost complete. He has learned and experienced the thing that he was meant to, and now he can turn those experiences into a piece of art.

Why am I writing about this?

For me, it was a reminder that the journey is the art. Who we are, what we do and experience everyday, our joy, pain and suffering – everything, can be channeled into something beautiful. You can take the sum total of your life experiences to date and turn them into a picture, a video, some text, a product of some description that impacts peoples lives because your inner world and your interpretation of your outer-world experiences are completely unique. They’ve never been seen before and if you can express them in a way that captures peoples attention and makes a difference to their world… That can be an amazing thing.

The fictional character Don Draper took his experiences and turned them into an advert renowned the world over (in its day).

You can do the same with your experiences. The barrier to entry is lower than it’s ever been. You can self-publish a book on Amazon, a video or film on YouTube, your music or words on SoundCloud and iTunes. You can teach, inspire, instruct or entertain in any way you want to, to any audience the whole world over.

The only thing stopping you, is you.

Often, that’s a discipline issue. So why not commit to 90 minutes of building your audience a day? Download a free program to help you do it here.

Do You Even Trust Anyone Or Anything?. It is time

Inside of you, is incredible wisdom. . You know wh