THE STORY OF 2 APPLE FARMERS – WHICH ONE HAVE YOU GOTTA BE TO CREATE WEALTH?

By Rosemary Nonny KnightMarch 7, 2015Self Development
No Comments 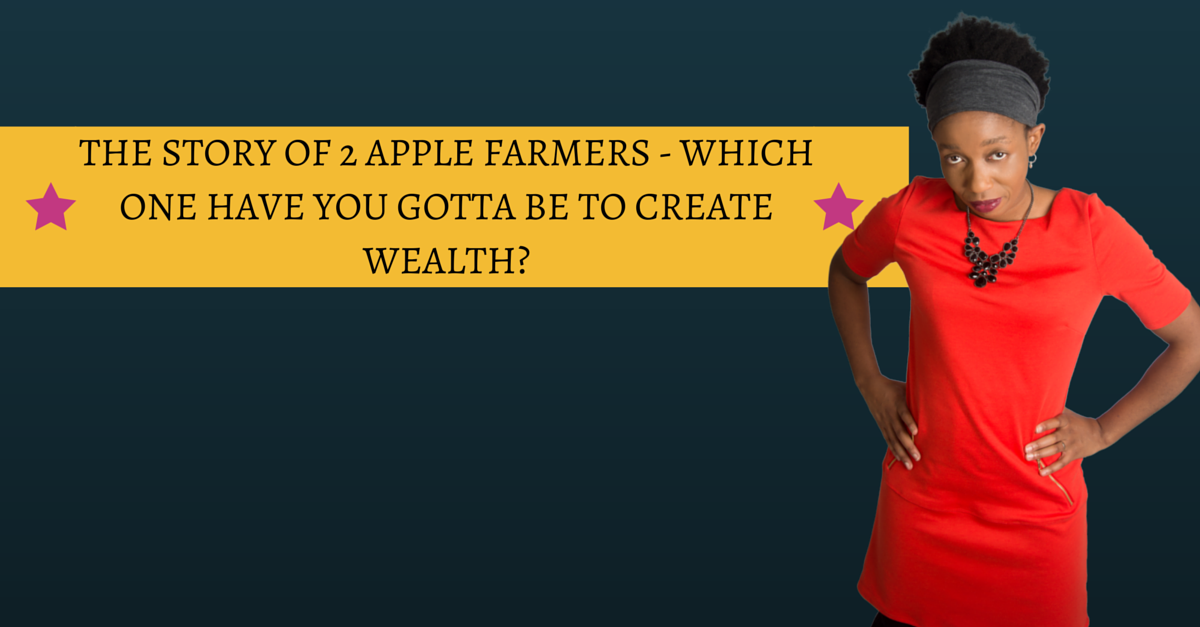 On a side note – Please bear in mind that I know nothing at all about apple tree rearing – In fact, I have one in my back garden which produces the most misshapen horrid looking apples every year and I find it pretty burdensome to have to get the princesses picking them off the ground every year 😀 so my hubby can mow the lawn without them destroying the mower.

I do keep trying to get friends to come pick them and take them away but so far, they never seem to take enough of them away to avoid the crazy, annoying need to convince the princesses to do this tiresome job of picking apples off the lawn :-D.

(Take this as a hint and a public service to the princesses if you are a personal friend of mine – Come take my apples away this summer. PLEASE!)

OK, back to the farmers…

2 Farmers both creating the same product and yet they are making wildly different amounts of money.

One of the farmers has a vast expanse of farmground which is absolutely covered in apple trees – Each year, he reinvests his profits into planting more and more trees, employing more and more staff to support him in building his empire.

He cannot completely trust his staff so he works harder and harder himself to make sure that everything is done.

He is getting more and more stressed by the supermarkets and their desire to keep undercutting his prices and though his work hours increase and increase, there does not seem to be an equivalent increase in his profits.

If anything, things seem to be getting tighter and tighter and he just cannot figure out why this is the case.

But he is nothing if not hardworking, so he keeps doing what he does, just like his father did and he ignores the little niggle in the back of his head… The one that says “Your dad died young doing this and you have been doing it this way since your youth. This is not sustainable, the world is changing, what are you doing about it?”

In the meantime, Farmer B has a smaller piece of land that he bought on a whim in his youth. He suddenly had an idea of getting closer to the land so he left his high-flying career in the city and decided to make a living doing his apple business.

He also decided that as this was such a new venture, he would start a blog & Facebook page about it and tell anyone who cared to listen all that he was up to. He started by inviting his friends to follow his crazy adventures and he got to work.

He bought this farm off some person who had got tired of running it so he had a steep learning curve as he had to learn everything about growing apples and managing the people who came to help out. He could almost smell the glee pouring out of the last owner as he took his money and ran off quickly before Farmer B could change his mind!

He had to make connections with the supermarkets to try to sell his apples. Thankfully, there was one contract in place when he began. However, he noticed the bigger stores kept trying to cut his prices.

He blogged about his frustrations, his fears that he would not be able to sustain this thing and he also allowed himself to try new things.

Every so often, he would go off and learn all about new ways to do marketing for his farm. He kept a close eye on what people were doing in other industries and spent time thinking through how he could implement some new ideas in his farm.

HE was tempted to spend all day working his fingers to the bone just so he did not have the added cost of staff to pay but he recognized that if this thing was going to give him an income and a lifestyle he actually enjoyed, he needed to be working on the farm, not just in it.

So, he kept telling the world what he was up to and implementing new ideas that he saw others doing in other places. He stopped depending on just one source of income – the big supermarkets. He decided to also go straight to consumer and through his blogs and social media efforts starting inviting people to come see what he was up to.

And new streams of income started to develop as he implemented ideas that seemed crazy to most other farmers but they started to work for him.

The thing he noticed was the more mistakes he made, the more great ideas he came up with as well. And he kept being transparent about what was going on and telling people all about this adventure of his.

And after the initial crazy phase where nothing seems to be going right, he woke up one morning and realized he was actually having fun!

And he was making money too!

And now he had other farmers wanting to learn what he did AND pay him to teach them.

So tell me, which farmer would you like to be?

Unforgiveness keeps you on the outside of prosperi

You do not need an explanation or defense. . If it

You keep looking for new tricks and tips and strat

Believe in yourself. . Believe in the vision you s

You want the tips, the strategies, the step-by-ste