By Rosemary Nonny KnightMay 5, 2015Self Development
No Comments 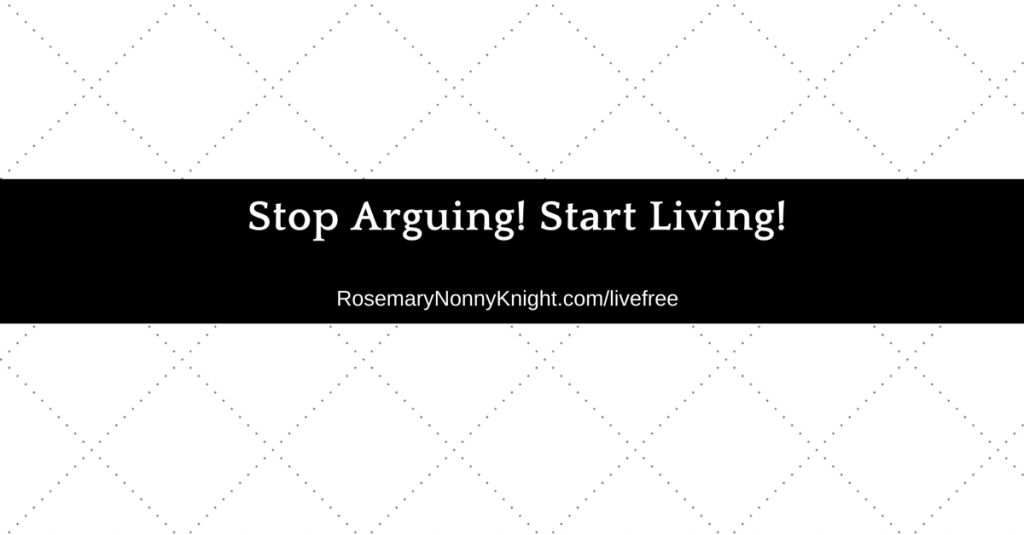 If you are anything like me, then you love a proper argument every so often.  You have friends come over to enjoy a happy meal with you and next thing you know, you are arguing about the government, the church, the people, child rearing, your parents and everything under the sun.

Of course, you know that the argument means nothing – It is just you letting off a little steam, voicing your opinions, seeing if they hold true under pressure and everyone leaves feel friendly and the world carries on turning the way it was before your argument.

And yet, there is a kind of arguing that leaves you feeling down, out and unfortunately, it gets you absolutely nowhere.

This argument occurs when you are absolutely determined to be right about things that you cannot change.  You determine to get other people to say that they are wrong and honey, no one likes that!

So… you keep pushing your head against a brick wall hoping that in time you will break bits of it but actually, all that happens is that you batter your head into a bloody mess and still the wall remains upright as though you have not even touched it.

At what point, do you decide that your efforts are more useful elsewhere?

This morning, I was reading in the Bible about a dude called Isaac.  He decided he was going to unblock the wells his Dad had built.  So, he did.

And then, all of a sudden, some random people came to claim it and decided that now that Isaac had done the hard work of bringing the well back into use, they wanted it.  And yes, it would seem on the face of it that it was Isaac’s right to fight for his well.

Of course, no one was there to argue about the well when there was work to be done.  But when there was fruit to be enjoyed, suddenly, it was everyone’s well.

And I suppose Isaac could have stuck around and decided to argue about it or he could just choose to let it go and move on knowing there was more than enough for him elsewhere.

That is what he did.

But then, AGAIN, someone came to claim it – I mean, he had built this one from scratch and still, there was a dispute about ownership.

He could have stuck round to argue…

Maybe he did for a little while, who knows? The bible does not say but what it does say is that Isaac went somewhere else and built another well.

And finally, this time, there were no arguments about it.  He had found his peaceful place and he felt pretty darned blessed about it and when you think about it, he had also left prosperity for others in his wake.

Now, I wonder to myself, would I have the sense to move on from the hostility or would I stay in place arguing and arguing about my rights and how MY FATHER built the first well and how dare they try to come claim it after I had done the hard work of clearing it etc etc etc

That could be me…

Or maybe, just maybe, in a flash of wisdom, I would see that I can just move on and rebuild.

How much energy is spent in trying to claim rights?

How much energy is spent in pointless arguments that get no one nowhere?

And I am as bad as anyone when it comes to this.

I want to be right at the cost of my happiness, my freedom and the abundance that is waiting for me if I will just move on and see it.

People argue about things like this when they feel a sense of lack.  If you feel that your sense of worth is based around winning a crazy argument then you will fight to the death for it.

But it is just an assumption you make. You assume that unless you get yours in this exact, prescribed manner then you will never get yours.

And honey, that is not true.

Open up your hand and forget about your rights – Deal with the situation right here in front of you, not the one you are creating in your head.

Would it be easier to just let this one thing go and move on and find success elsewhere?  All the time you spend arguing about your rights to something could be better spent building something new and creative that no one can claim.

And hey, you too could leave a trail of prosperity in your wake as you move on, knowing that abundance is all around you , not just in that one palce that someone wants to argue with you about.

Be deliberate about creating happiness in your life.  Choose to leave any strife out of your life unless it is an enjoyable mini-argument like I mentioned at the start.  Those can be fun!

Do you want to learn more about opening up the gates of happiness, freedom and abundance in your life?  Join me this evening for a 45 minute discussion of 6 business models that work to create wealth even if you feel someone has treated you badly.  Maybe you will find it easier to move on when you realize how simple it can be to do so.

Yes, you could listen to your fear and doubt telli

I was a successful pharmacist but I was unfulfille