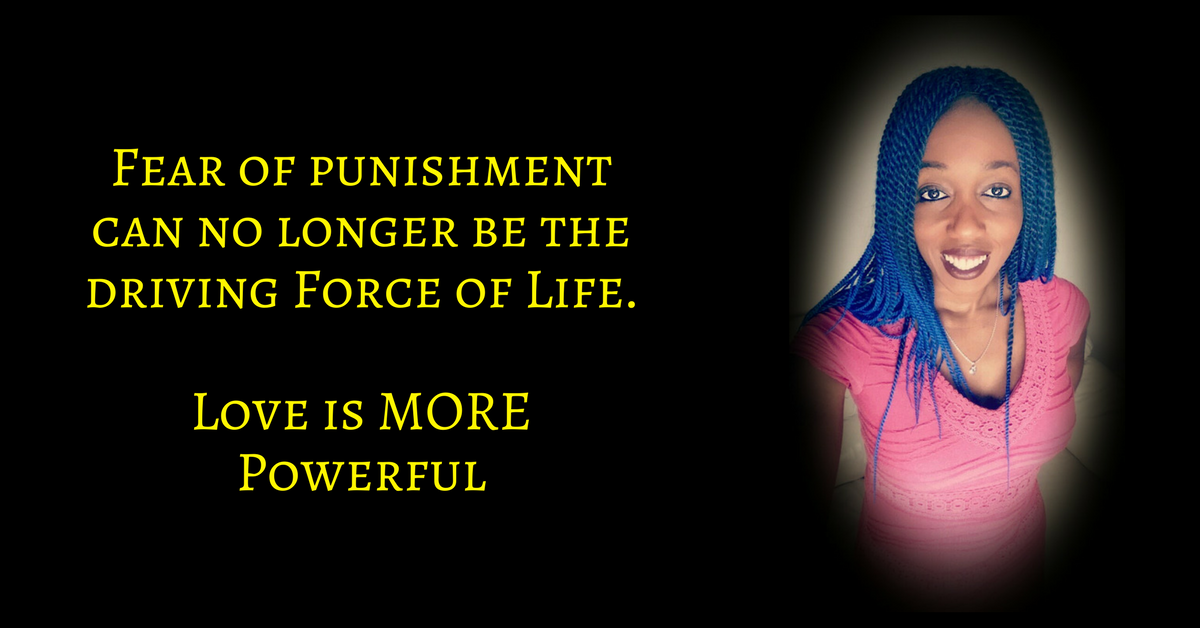 What If You Did Not Fear Going To Hell?

Tell me, what if you were not afraid of spending eternity in hell, what would you be doing with your life?

What if you really truly believed that nothing and no one was out to get you, what would you allow yourself to do?

Some people think that without the threat of punishment, no one would ever do anything good.  I do not believe that any more.  I used to.  I used to think that humans were inherently evil and bad and YUK and that when left to their own devices, they would always succumb to the dark side.

And yep, some will.

But I do truly believe now that MOST will not.

We only ever seem to hear about those that do succumb though – they make for more entertaining news whereas those who patiently and peacefully seek to do their best are considered boring and so they are not reported on quite so frequently.  And so, is it any wonder that most people think that humans are inherently evil?

Maybe, I am seeing the world and the people in it, through rose-tinted glasses but I am happy to keep them on and continue to see the best in everyone.  I tried it the other way and even my own life got smaller as I was always waiting for someone to do something horrid to me.  I saw the bad because I was looking for it and I still have to catch myself and choose only to see the good.

Let’s come back to the question at hand here…

What if you did not fear going to hell?  What would your life look like then?

What would you allow yourself to do then?

How much freer would you be then?

I can tell you that when I finally got my head around the fact that God was not waiting to punish me for all eternity, I finally got free enough to simply have a cool relationship with Him.  Not because I thought I HAD TO but because deep down inside, I WANTED TO!

I could talk to Him about sex, pornography – things that had given me all kinds of trouble in the past.

I could talk to Him about my dreams without thinking that He was going to take them away from me and MAKE ME go to some god-forsaken place in the middle of a jungle somewhere (maybe I exaggerate but I had decided that Papa was no fun at all as He was the punisher, waiting to TAKE ME DOWN! – I realise now that I likened Him to my natural father who was depressed a lot and wanted everyone else to feel his pain)

I could just be myself with Him and in doing that, I allowed myself to discover what I really wanted rather than what I thought I had to be or do in order to make Him happy with me.

I could finally relax.

I could breathe again.

I was loved, regardless of how right or wrong I got it.

I was free to explore anything and everything.

Yes, there are some things that are better for me than other things but hell was just not something that was waiting for me, even if I explored all things.

I cannot tell you just how FREE it felt to shift the whole crazy ‘you are going to hell for all eternity’ idea.

It was scary to shift it.

And even now, saying it out loud to you in this way, scares me a little as old ways of thinking whisper to me that I could be leading others astray and what did the Bible say about those who lead others astray again?!!!!  Something about them GOING TO HELL FOR ALL ETERNITY! ?

But you know what?!

I am simply going to tell you what I think.

You need to figure out for you what you think.

For me, the DELIBERATE LIFE is one of thinking through your beliefs and daring to squash those that do not seem to stand up to scrutiny.

I choose to live life deliberately and Hell does not fit in with my relationship with Papa – It just does not and so I ditch it.

I focus instead on the love that I experience when I am not scared that He will punish me for any little thing I get wrong.

I focus on grace that allows me to be who I am and grow at my own pace.

I focus on being connected because I want to be rather than because I think I HAVE TO be.

Honey, how much freer would you feel if you ditched the whole HELL concept?

How much freer would you feel if you ditched the whole PUNISHMENT concept?

I mean, how different would relationships between children and parents be if we ditched the idea that we have to PUNISH children for being their curious, exploring selves? I am not saying that we do not offer advice or teach about consequences?  But this idea that we have to PUNISH them (sometimes VERY HARSHLY) to bring them in line is just an offshoot of a weird relationship we have with a spiritual being that makes us think that the THREAT OF PUNISHMENT is the only way to bring out the best in a person.

I just do not believe it, anymore.

I believe the whole punishment, hell concept is of man’s creation.  In response to our guilty feelings – Feelings which are sometimes not at all, justified.  And also, as people tried to lord it over other people, to control them, then punishment was used by religion to stifle others and keep them doing what they were told to do.

Surely, it is time we reconsidered why we do some of the things we do.

I am not always the most learned person on the block so I am sure some person can theologize me to death with their deep thinking as to why we should all still live as though there is a likelihood of being punished for all eternity but you know what, I go by feeling, by intuition, by my real relationship with Papa and I know that the only real hell, is the one you create when you decide that hell is real and you live in fear of it and you live apart from your connection to Source because you fear Him or want to rebel against Him.

But as I say, you must think these things through for yourself.

I simply want you to be free – FREE to be all that you are without fear.

FREE from guilt and shame

FREE to be in real relationship with your higher power without all the hoop-jumping that you think you have to do which actually just keeps you away from a real relationship as you keep trying to prove yourself instead of just allowing yourself to be loved.

Dare to question ideas that do not sit right with you.

Dare to experiment with things that you are curious about and dare to take them straight to Source without deciding for Him what He SHOULD think because of all the conditioning you have received from the pulpit or from the media or even from your family.

Do you not see that you can only truly live out the calling on your life when you are free to be ALL of you?

If you are walking around stifling yourself because you are worried about punishment, then you have no chance of making the difference you are born to make!

Don’t you know that sometimes the very part of you that is most hidden because you are most guilty and ashamed of it, is usually the place that would serve the world the most if you would heal it and let it be seen?

That is why you sometimes feel incomplete because you are shutting down parts of you in fear of going to hell.

It is time for freedom.

But freedom can only be claimed deliberately.

Wow, this went on a lot longer than I thought it would.  I started out thinking that I did not really know what to say about it all – Actually, I was scared of saying what I really felt but then somewhere in the middle, I simply decided to express myself any old how.

I hope it gets you thinking.

And if you suffer from an underlying level of guilt that you cannot seem to shake off, then can I encourage you to get the free training I did called ‘Go Away Guilt’ – Just a short training to get you thinking a little differently about it. – RosemaryNonnyKnight.com/goawayguilt

I have felt evil about my desire to be a productiv

Do not deny yourself the pleasure of a wealthy lif