Fairness, Equality, Unity – Lovely Sounding Words But Rubbish If You Have To Be Anyone Other Than You

By Rosemary Nonny KnightMay 4, 2015Self Development
No Comments 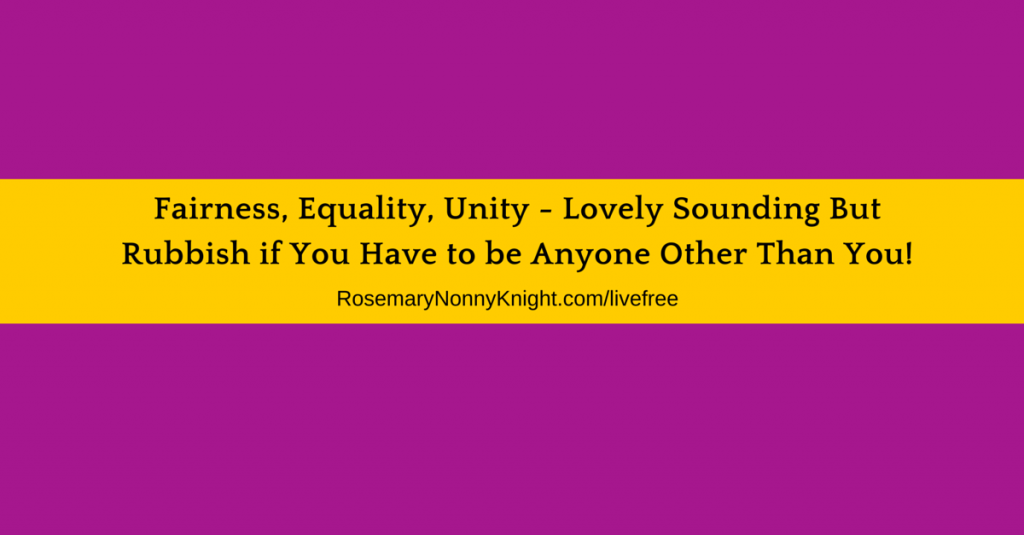 Once upon a time, I belonged to a church that wanted everyone to earn the same, dress the same, be the same.  And it seemed revolutionary until I realized that it was soooo not working for me.

Unity! Equality! All those lovely sounding words and yet, what it really meant was ‘Be like me’…

As if such a thing is even possible!

It is like trying to treat a gorilla and an owl the same in the name of equality, fairness, unity, etc etc etc…

It is impossible and it is such a fallacy…

And yet, every human system tries to do some variety of the same.

You try to convince yourself that it is the way it must be in order for life to be fair and I wonder ‘fair to who?’

So, when you force the lion to act like the lamb and you claim it is to protect the lamb from the lion, yes it seems fair to the lamb as the lamb is no longer food for the lion but what of the tame lion?

The tame lion who now has to deny his very nature in order to be accepted and approved of.

And, in the end, both the lion and the lamb learn to be weak…  They both have to be looked after because their natural instincts are dampened in an attempt to propagate ‘fairness’.

The lion, as well, weakens because he too has to be fed by some external means meaning he too loses his wild streak.

People are more likely to fight the zoo about keeping animals caged and weak than they are to see that that is exactly what we do to each other when we strive for our very weak version of fairness!

No, I do not think people should eat people and no, I do not think the strong should overpower the weak but neither do I think that every one is equal and should therefore be treated the same.

I see the weakness that becomes standard when you allow external forces, rules, regulations to determine what people can or cannot do.

When you try to make everyone the same regardless of their true nature, everyone suffers.

We send our kiddies to school where they learn to be the same.  They learn to temper their edges because other students, their parents, the teachers cannot handle it and so we make them weak.

And then we complain of the youth of today!

Because they foolishly follow any new trend, any seemingly exciting path because they are trying so hard to fit in, to be the same, to do what others do, just like we taught them.

Their natural instincts dampened and diminished until one teenager is almost the same as the next and we hate the result but do nothing about the pathway there.

As adults, still we try so hard to be accepted.  We dampen our passions, our message because we are worried about what people will think of us.  We get trapped in jobs that we hate but it is the norm so we stay in place.

And we tell ourselves that this is the only way for the system to work and everyone gets chained to their stuff so now, you are too scared to do anything other than the norm, just in case you lose your pretty home or car.

I was speaking to a prospective client a little while ago and she was paranoid to the nth degree.

She had been so brainwashed by the system, having worked in the government for years and years.  She was now too scared to discover what she really wanted to do, in case she got taken to prison!

Now, that was a first for me!

Prison for following your heart!!!!

Seemed a little bit paranoid to me (and I can be a conspiracy theorist!) but she was convinced that she had better not step too much out of line just in case!

Just in case, she was in the wrong place at the wrong time and she got taken to prison!!!

So, the reason she was speaking to me was because deep inside, she knew she was capable of so much more but now, her fear would not let her even explore any other options.

Will that be your story?

Dying with your song still in you because some person told you that you had to be the same as everyone else, because it was ‘FAIR’

I certainly hope not!  I am working pretty darned hard to prove to you that anything is possible if you want it!

SOOOOOO if you are ready to break free of your chains to so-called fairness, so-called equality, and begin to stand out as the leader that you are, come join me for a FREE Masterclass where I show you SIX business models that lend themselves to a FREEDOM- based lifestyle

6 Business Models That Give You Time And Financial Freedom While Utilizing Your Strengths – No More Compromising Who You Are To Suit Anyone Else – Make A Difference, Make A Fortune Doing Things That Make You Feel Good.

And together, we can discover the true meaning of freedom, equality and fairness as you build business in a way that utilises your strengths and we talk about issues that keep us trapped in a life we are no longer prepared to settle for.