If I create wealth, won’t I become evil & stressed? And Won’t God Hate me?

By Rosemary Nonny KnightAugust 16, 2015May 6th, 2020Entrepreneur, Leadership, Self Development
No Comments 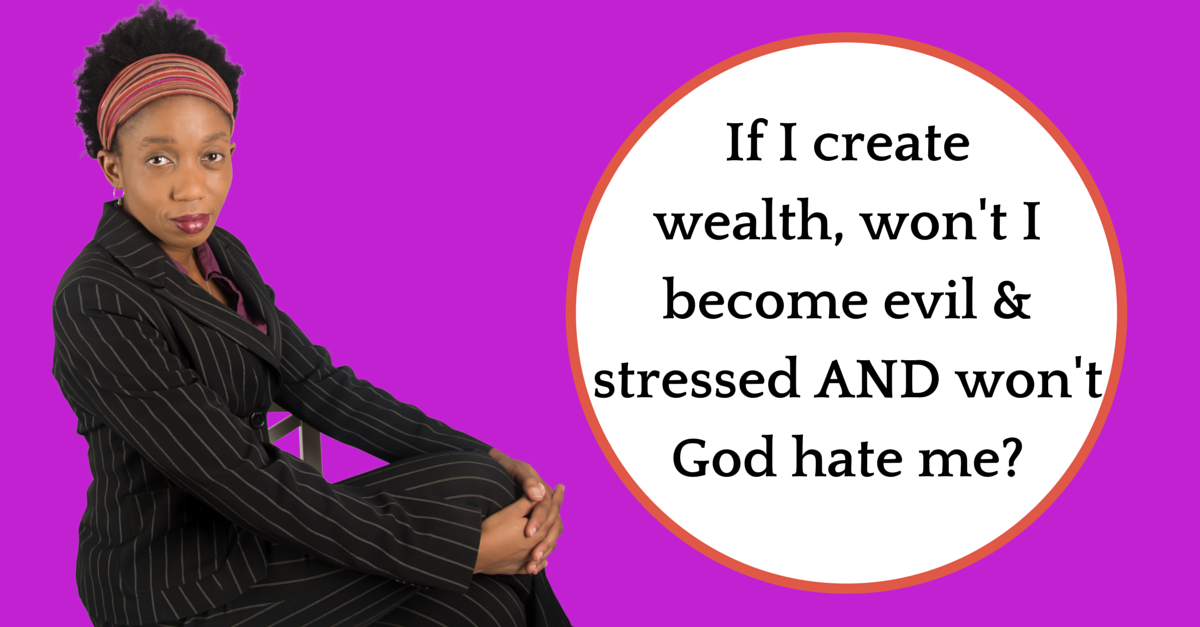 For a long time, I thought it was righteous to be broke all the time.  I would not have said it quite like that out loud but there was a discomfort, a fear that came up around money.

I wanted it and I did not want it all at the same time.

And needless to say, with all that inner conflict, I was broke a whole lot of the time.

I would get money and feel compelled to get rid of it as quickly as it came or maybe even quicker than that.  Debt was my best friend as well as stressing about money.  It was no fun but I seemed addicted to it.

My friends and I would talk about not having enough as thought it was something to be proud of!

The only avenue I saw for the creation of more wealth was to work longer, harder and be more stressed and I did not want that and so I remained broke.  Earning a lot by the standards of most of the people around me but never quite having enough.  It seemed to dissappear before I could take a hold of it.

And so life continued until the reset – bankruptcy, depression, hopelessness and finally I woke up.

And now, I unfortunately watch and listen to other people who think the same untruths about money. Are you one of those misguided people?

And is this way of living, acting, thinking making you feel pretty stressed out because you do not have the money to do the things you would love to do?

And the biggest problem, of course, is that because you have these false ideas of what it means to be wealthier (more work that you hate, more stress, no time for relationships, no time for God etc etc), you will never allow yourself to BE WEALTHY financially.

That is a doggone shame!

I get riled up when I see very capable people who could change the world if they would just put themselves out there and instead they tell me about how making lots of money brings far too much stress and they will never see their families and so on and so on.

And it is such a fallacy.

Because most of the people who tell me this are generally broke and having to do work that they do not want to do in order to keep food on the table and I find myself wondering who is more unfulfilled?  the person who is creating wealth their way or the person who is broke and wishing for things they will never make happen.

Be careful about the thinking you allow to take root in your mind.

Here are a few ideas to think about…

1. Stress does not increase based on the money earnt

Yes there are ‘wealthy’ people who make their life pretty stressful because they have a belief system that demands them to work for every penny that comes in and they believe that making money is stressful.  We always get what we expect.

Having money allows the wise, wealthy person to buy in support so they are not trying to do everything.  This advantage is not enjoyed by people with little money because they are too scared to let go of any of the pennies in case they get even more broke.  So, they keep doing things that cause them stress or they fail to do them and cause relationship tension instead.  For instance, they think they are too broke to afford a cleaner and so the house falls into disarray, the working partner returns home to a mess and they argue about it.  And all because they refused to be wise about where they place their energy and money.

Money can reduce stress if you allow it to.  MOney has no meaning until you give it one – What meaning do you choose to give it?  And where did that meaning come from?  Are you possibly allowing some media person’s ideas to stick around in your head causing you to be broke?  Or maybe, you still have the voice of a parent in your head telling you that the rich are greedy and they work too hard to grab every penny they can get and so you made an inner vow, never to let that be you?

And now, you are broke!

Question your innermost ideas – They help or they hinder you.

2. Money does not have to be earnt in a linear fashion

The income into your home does not need to be dependent on how many hours you work.  That is a model that has you selling your time which is very limited.  You can create an asset once and put a sales funnel in place for that item to be bought over and over and over again.  You can then create another asset and do the same again.

An asset is a working business, a book you have written, a piece of music – We have all heard of the royalties that keep turning up month after month for some ‘lucky’ person but the truth is, it was not luck – Someone had to do teh work first and then they got lucky.  That could be you!

Money does not have to be earnt linearly, you can choose to move to the exponential track.

Do the work once and let it keep creating wealth for you.  This of course, leaves you time to do whatever you wish.

3. You always get a choice

I talk to some people about what they could do to create wealth and I hear a sense of inevitability to their voice.  They give up on ever putting the initial effort in because they think the end is a foregone conclusion.

And their conclusion is always negative – They either think they will always struggle to have any money or they think that if they get it, they will inevitably loose their family and friends or worse, they think they themselves will become someone they despise!

I must admit, when I talk to people like this, I back away because you just cannot baby anyone to success.  If they refuse to own their own potential, I could talk and support until the cows come home and they will just sit there expecting to fail or to lose all their loved ones.  There has to be a part of them that truly believes it is possible to get all they want out of life.

Yes, you may chose not to hang around certain people but it will be a great thing because you realise that their particular brand of negativity is just not what you want to be around anymore.  The person you become may realise the metaphorical squalor you used to live in but would that be such a bad thing?

Yes, you will get some people hating the way you do things, hating that you left them behind in the ‘squalor’, hating that you have chosen to progress but so what?  People will always have their own opinions.

And no, you will not lose God if you choose not to…

No, you will not forget your kids, if you choose not to…

No, you do not have to become an idiot just because you have some money…

You always get a choice about who you choose to be whether you are wealthy or not.  So why would you give money so much power over you?  It only has the power you give it.  Get deliberate and choose who you want to be, regardless of how much money pours into your household.

Need more ideas for making your transition from unfulfilling job/business to fulfilling and highly-profitable online business? Get the FREEDOM COLLECTION – It covers everything you need to make a swift transition if you are willing to follow along – RosemaryNonnyKnight.com/freedomcollection

#Affirm with me: I feel my/all time expanding. I a

Sometimes, you wait to be acknowledged, validated,

Fear is such an insidious monster. . It keeps you

Awaken! Live! This is your time. . Please rememb