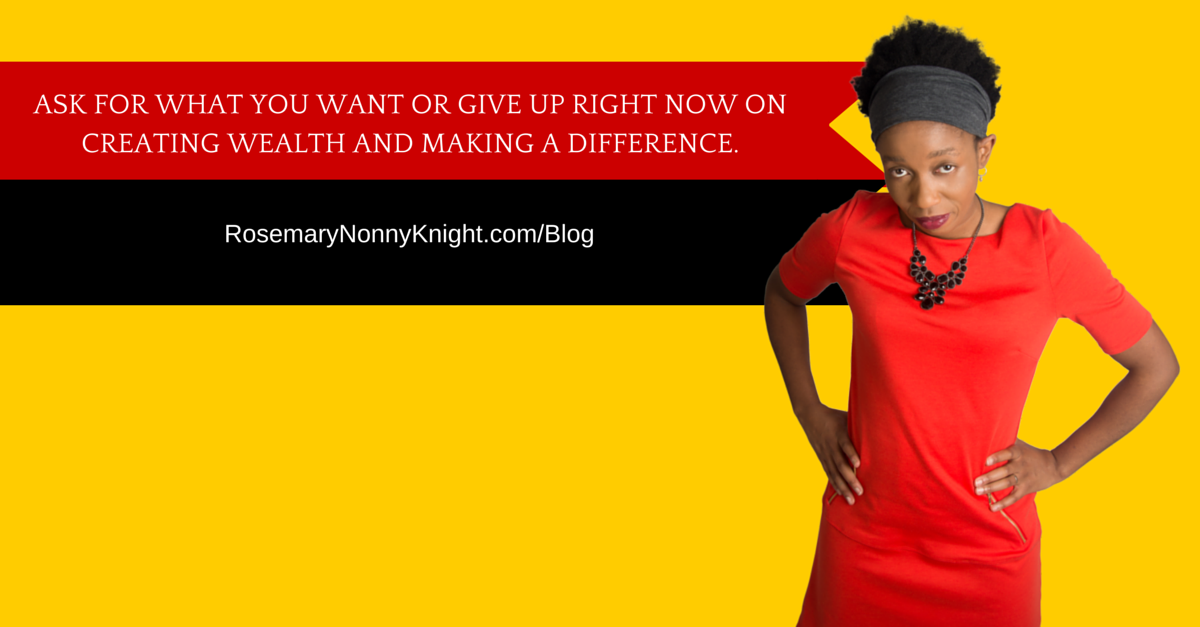 You kinda know this but for whatever reason, it gets pretty scary to do.

You get scared of asking your people to buy from you EVERY SINGLE TIME YOU COMMUNICATE WITH THEM!  You think it makes you mercenary to always show people how they can buy from you.

You seem to forget you are seeking to positively impact lots of people while creating an income and it is your internal drama around money that is making you think that no one wants to buy so you do not ask enough and wonder why you are continuously broke.

You get scared of asking people to promote you and your business – Again, you get into this crazy head drama about not being good enough yet to be promoted so you struggle along alone, hiding your light, never asking for help which would accelerate the growth of your business.

In every area of life that is not working out for you, there is a place where you are not asking for what you need and want.

In your relationships, you continually allow other people to walk all over you because you refuse to ask them for what you need…

From your kids, from your partner, from friends…

You allow people to treat you in a way that makes you angry and you feel a victim of your circumstances but you are not.

You just have not asked for what you need and expected to get it.

There is a story in the Bible about a woman who wanted her daughter healed and she was not part of the ‘special’ tribe of people who were being seen by this particular miracle man (or so she would have thought) – She was a part of a tribe that was considered lower than the low – They were considered dogs when compared to these other people and you know what, she could have decided that because she was considered to be worth so little, she just needs to settle for this existence with her sick daughter and accept it as her lot in life.

Lots of people would do that.  They would think that their upbringing, their environment, their family status somehow determined forever what they could expect from life or …

Like this courageous woman, they could have a picture of a better life and decide to do whatever it took to create it.

She may have felt embarrassed to put herself out there but the vision of what she wanted was stronger than her fear of what people would think of her going above her station in life.

And because she defeated her inner ‘crazy’, she got what she wanted.

Man!!!, you could have ANYTHING if you would just ask enough people for what you want!

Choose to rise victorious NOW in your true design.

Start by immersing your mind in the ABUNDANCE LIBRARY.

Let the programs rewire you for increased happiness and prosperity.

Let the programs support you in leaving behind the pain and limiting beliefs of the past.

Get your $1 trial now at https://mibusiness.lpages.co/the-abundance-library/

HOW TO WALK IN REST? I recently noticed an email t

THE RELATIONSHIP DRAMA KEEPS YOU FROM WEALTH It is