An Evening at Zippo’s Circus 2

And the evening carries on a mixture of excitement and annoyance as I contend with the fruits of my womb while experiencing the joys of the circus for the very first time. 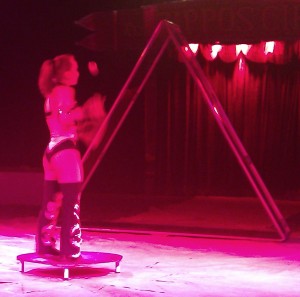 And out come a group of girls with chairs and they proceed to dance and then they all leave except one girl who then does some juggling with balls.  Behind her is a triangular stand which she bounces balls off of.   I am slightly underwhelmed with this part of the show.

And of course, V suddenly turns round, having been watching the show with all concentration, and exclaims that she must wee!  Aargh! being the lovely Mom that I am, I tell her to wait! After a little halfhearted moaning, she returns to the show.  She is engrossed though holding onto her bum area as she attempts to hold all fluid in.  I feel slightly guilty but her timing could have been better.  We did just finish an interlude, after all.

The clowns return, this time as magicians and it is another funny offering from the male and female clown.

Out comes a black horse and some dancing ladies.  After a little bit, a man with long flowing black hair comes out as well and there are two ladies and this guy on wooden circular blocks, all wearing clip-clop heels which can be heard as they dance in time to the beat of the very majestic sounding music.  They each end up with (I am not sure what it can be called) but it is a piece of rope and a stone at the end – Probably nothing like that at all but that is how I shall describe it and it will henceforth be called the ropey :-D).  The ropey is twirled very quickly around the guys body and face.  Any mistake and he could possible take his eye out so quite a bit daring.

After this ends, out comes a lady clad in a long leather jacket and 4 blonde (brown) horses.  the horses run round and round the ring, they dart and weave between each other and some stand on their ind legs and it is a pretty good show with the animals.

At intervals, I am getting sad looks from both my older daughters as one laments the lack of twirly, lighty thing and the other tries hard to not wet herself! I ignore both – Yes, I can be a bad mother!

The clowns return again and with the help of a few audience members, a production depicting Darth Vader, Princess Leia and Luke Skywalker ensues.  Very amusing to see people do silly things.  Great!

An acrobat on a trapeze again but even more daring this time and then out comes the long haired guy again with fire on his ropes this time which he then proceeds to spin with great speed, it is amazing to watch.  The african boys return and do the conga under a fired pole.  The guy goes next to the ground by the end of it.  Truly breath taking to watch.

The upside down lady with her legs in the air on a motorcyle returns and twirls a few fire laden things as well – another daring act.

And now the finale –

V is now desperate so I try to take her out but am faced by a long queue as the next audience is standing just outside the entrance.  I get the feeling that if I leave now, we will not be allowed back inside so I convince V back in and then…

The Circus master steps out and announces the final act.  Behind him the circus hands are bringing out a metalic globe.  Almost like a huge disco light with holes all the way through it so we can see what goes on inside.  He brings out a disclaimer agreement and states that no insurer in the UK would insure this final act and so they have to sign a disclaimer to state that if anyone gets hurt, it is all on them.  The tension builds up in the audience as this goes on and then we realise we are about to have a motorcycle show – just like hamsters in a ball, the motorcyclists from Brazil are going to ride round and round the globe including upside down very quickly.

Wow, now this is an amazing act.  This made the whole circus trip worth it.  It was amazing to watch up to 3 motorcycles going round and round the globe and never once touching each other and even with a lady standing at the bottom while this was going on all around her.  Wow!  This was stunning,  Take a look at the video and see just how amazing it looks!

Zippo’s Circus – Great or not?

Definitely worth the effort of attending  but here are a few tips.

The suffering is a result of all you hold onto. .

Honey, those high walls of yours are keeping you c