I have recently been reading a portion of some sacred text which got me thinking.  Let me share the story I read in my own words. It will probably take a few days.  Enjoy! 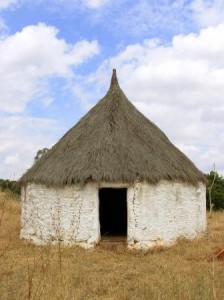 Aaron could still remember running through the fields as a boy – The feel of the rough stones beneath his feet as he ran barefoot amongst the stalks of corn in his father’s farm.  His callused feet had become so used to the rough earth that they no longer even bled.  He had been one of the popular boys in the village and was always getting up to some mischief or the other.  His mother seemed to constantly be shouting from her cooking spot behind the hut about some misdemeanour or the other, but well, it was the same for most of his friends and their mothers too.  Most of the cooking spots in the village looked out onto the farms of the men of the village so the parents could see what their offspring got up to without leaving their place of work for the day.  Aaron and his best friends, Sam and Jon, had an idyllic life and they cared for nothing. This was their world and they loved it.

Aaron could also vividly remember the day it all changed.

A normal day to start with – Aaron had awoken early to go on a hunt with his pals. They had never actually caught anything yet but there was always another day.  Aaron knew that one day, it would be part of his duties to bring home a dead animal to provide meat for the family but at the moment, he was still a boy.  He had quickly dressed and crept quietly out of the hut without awakening anyone else.  It was just before dawn and the target hiding place was the tallest tree in the forest behind their village.  From this vantage spot, they were able to spot passing antelopes that they could use for target practice.  They each had a catapult made by their fathers or older brothers and given as a gift.

Off they went, deep into the forest, following well used trails.  This was part of their home, they were familiar with every part of it.  Finally, they came to their tree – It was magnificent, It stood taller than all the other trees surrounding it.  Their older siblings had placed a ladder of steps all around the tree so it was easy to climb all the way to the top. And so up they went.  They had done this on numerous occasions before so it was easy and it was quick.

At the top, Aaron, Sam and Jon each had a favourite place to sit.  The exhilaration of being up there on top of the world was so exciting that to start with, there were yells of “Look over there, it’s a monkey” or “Look, it’s my hut”.  Then, silence descended as they watched the sun come into view from behind a horizon in the distance.  It was a majestic site, amazing to watch.  Every time, the view was new.  From birth, they had been taught to give thanks to their unseen God and every time they watched the sunrise, they could not help but obey. 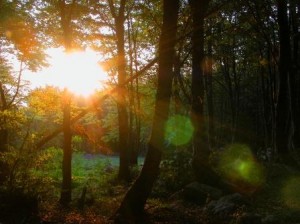 It really was a magnificent site as darts of light shot out from behind the darkness and lit up the forest – What once had been a mass of shadows became bright and streaky with light.

The friends watched this for a period of time and then their attention turned to the task at hand.  They were silent as their eyes scanned the forest beneath them for signs of movement.  They could only talk in whispers as they did not want to frighten off any potential meals as they went by.  Finally, after about an hour of this, Sam spotted the antlers of an antelope as it made its way gracefully through the forest, looking for its own food, unaware of the eyes trained upon it.  Aaron, Sam and Jon got ready to shoot with their catapults at the ready when suddenly from above them came a sudden shriek!

The shock of the sound made them all jump and Aaron loses his footing and as his hands are holding onto a catapult on the ready to shoot, he is unable to steady himself and the next thing he knows, he is falling down, down, down.  In the background, he can hear the yells of his friends and then it all goes black…